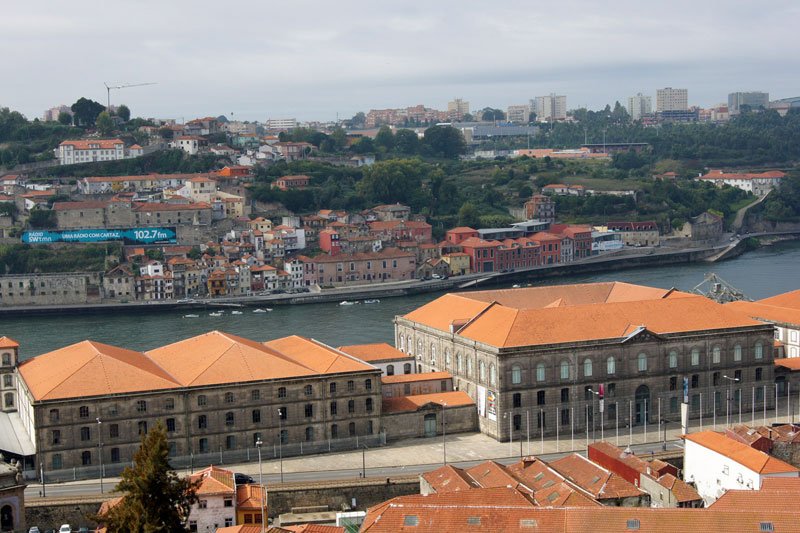 The Alfândega Nova do Porto (the New Porto Customs House) was built by Seyrig Incorporation (the same company that made ​​the Luis I iron bridge, in Ribeira), in the second half of the 19th century, and was completed in 1879. The building was introduced to replace the old medieval warehouses, in Casa do Infante, being so called the New Customs.

The building was designed to be practical and modern in its days. It even has a railway line that connected it to the railway station of Campanhã in Porto. The side facing the river, which can be well appreciated in Vila Nova de Gaia, was prepared to receive all the merchants that arrived by ship.

The building is located in Miragaia, right in front of the old tram line.

After the opening of Leixões port, further north of Porto, the merchant ships no longer need to sail up the Douro, so the customs closed its doors and moved to Leixões.

Currently, the Alfândega still keeps some of the bureaucratic customs services, but the space was converted for public use, in 1992. It has a conference centre, which also is used for concerts and festivals. It is equipped with bar and restaurant facilities.

The Museum of Transports and Communications (Museu dos Transportes e Comunicações) is also in the building. If you go there, it is worth visiting the Museum of Transport and its fantastic collection of classic cars. There you’ll see the first automobile that came to Portugal, a 1896 French Panhard. An Old Ford T, some British Jaguar and Austin, the old German school of Mercedes, Opel and BMW, all of those iconic manufacturers are there for you to enjoy in Porto.

Some curiosities pre WWII, as some big Chevrolets and Buicks from the 1920s and 1930s, a huge Rolls Royce, and the first prototype sport cars made ​​in Portugal, in the 1950s, are just some of the gems the museum hosts. If speed and cars are your passion, this museum is the place for you to go. A real live top gear show.