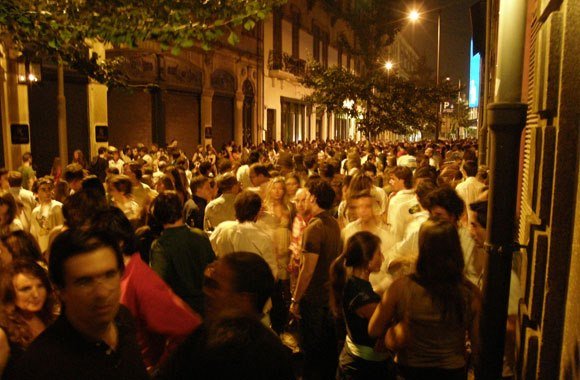 Where’s the nightlife in Porto

Porto’s nightlife as evolved in recent years. As the second largest city in the country, throughout the decades there have been some hot stops for partying or just socializing at night but nothing like what’s going on nowadays.

Almost every bar and music club is crowded. And they are so many that one can easily get lost – in all senses. From places who target rock fans like Radio Bar and Tendinha dos Clérigos to others more directed to electronic music, like Plano B, there are great in-between like Clube 3C, Era uma vez em Paris, Café au Lait and many more.

Have a glass of good wine at Candelabro, order a gin tonic at The Gin Club. Watch a concert at Armazém do Chá. Take a seat on the sidewalk drinking your beer. And this is only a tiny glimpse of the places to go on downtown.

There are alternatives to these crowed streets. At the uptown part of the city center, Passos Manuel streets is also on the map of nightlife with amazing bars like Maus Hábitos and Passos Manuel, which are not only part of the best memories of Porto’s nightlife from the past but also from the present.

For ages, Ribeira and Foz fulfilled our desires when night came. In Ribeira, you not only get unforgettable views but guess what: the historic Ferreira Borges Market is now home of Hard Club, a center for cultural events and one of the country’s best playhouses for concerts and electronic parties. And there are the Pinguim Café poetry nights. At Foz,  bars and clubs like Trintaeum, Twins Foz or Industria are a time worthwhile.

For commercial house music, the Industrial Area is a hive of discos. Ask a taxi driver to take you there (Zona Industrial), as is a bir off track from city center and night transports are not that often.