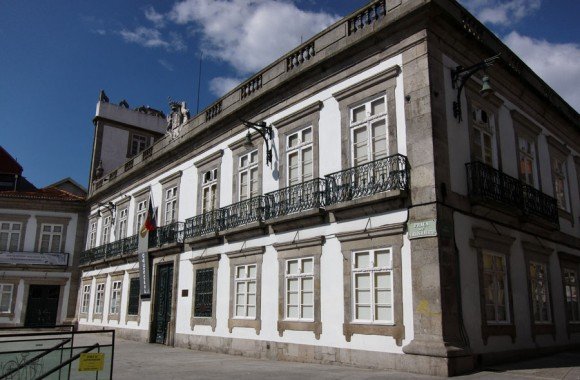 The palace and the city’s coins cabinet

This beautiful palace – Palacete dos Viscondes de Balsemão – is located right in the city’s heart, in the downtown area.

It’s a sober building from the late 18th century, built by the family Alvo Brandão Perestrello Godinho, and then passed, by marriage, to the Viscounts of Balsemão.

For decades, the palace was the private residence of the Viscounts. If you pay attention, you’ll see, on the top of the building, the family coat of arms, with the unicorn and the dragon, two fantastic creatures protecting the family house all over the ages.

By 1840, the palace was bought by a businessman, who turned it into a small hotel. It was during this period that King Carlos Alberto of Savoy rested here for a few days, in April of 1849, during his exile in Porto and before moving to Quinta da Macieirinha.

Today, the palace belongs to the city, where part of the cultural services of the municipality are installed. It is also open to the general public, so, you can visit it for free Monday to Friday, from 9:00 am to 8:00 pm.

Inside, it is worth visiting the large noble hall, decorated in honor of the kings of Italy and Savoy. The temporary exhibitions on the ground floor and, especially, the coin cabinet are some other attractions.

The city’s coin collection is one of the best and largest in the country. It began with the purchase of the collection of John Francis Allen, an 19th century wealthy English gentleman (well, he has born in Viana do Castelo, in Minho, Portugal, but his father was the British consul there), in 1850.

Today, the collection has hundreds of ancient coins, relics of the past, that tell us the history of civilizations,  like the Ancient Greeks, the Romans, the barbarian kingdoms, and, of course, the Portuguese history, from the Middle Ages to the present day and the Euro coin.

Around the palace, you’ll find several bars and cafes full of animation and snacks to enjoy during your city tour. Try Luso Caffè or Moustache Coffee House just by the corner or walk a few meters to check one of the oldest and famous cafes in town, Café Piolho.

You may like to try the Palace of the Viscounts of Balsemão virtual tour before you go! :)