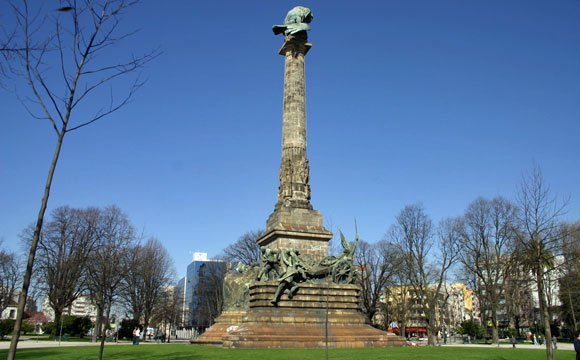 The name of this square – the biggest in Porto – pays tribute to Joaquim Augusto Mouzinho de Albuquerque, one of the most remarkable military and colonial offices of the African campaigns between 1894 and 1895. However, most of the local people refer to it as “Rotunda da Boavista” (Boavista Roundabout), because of its circular shape and taking also the name of the Boavista Avenue, one of the main branches that start at this square.

The statue is very symbolic and is dedicated to the heroes of the Peninsular War (1808-1814): the Lion (symbol of the alliance between Portuguese and British forces) smashes the Eagle (symbol of the French troops), alluding particularly to the tough resistance of troops and population to the invasion of general Soult in Porto.

Nowadays, it’s a very pleasant area although busy and packed with traffic. In the centre, there’s some green space which makes it a nice place for a walk or to take some time to rest on one bench and look at the map to decide where to go next. And the options are endless.

In fact, this square is very central and from there you can take some of the main streets and avenues in the city: Boavista Avenue, where you will find the Casa da Música (major concert hall), Serralves (Contemporary Art Museum), Parque da Cidade (Porto’s biggest green area) and, at the end, the sea and beaches near Castelo do Queijo; 5 de Outubro street, adjacent to Casa da Música, where I recommend the Meidin Restaurant for pizzas and savory crepes; Avenida de França, where you can find the metro stop “Casa da Música”.

Then, you have Nossa Senhora de Fátima street, where you can visit the House-Museum Marta Ortigão Sampaio, which has a beautiful collection of paintings and jewelry; after these, there are Boavista street and Júlio Dinis street, a nice street for shopping and having a coffee; adjacent, you’ll find Gonçalo Sampaio street, where the nice boutique centre “Península” and the shopping mall “Cidade do Porto” are located.