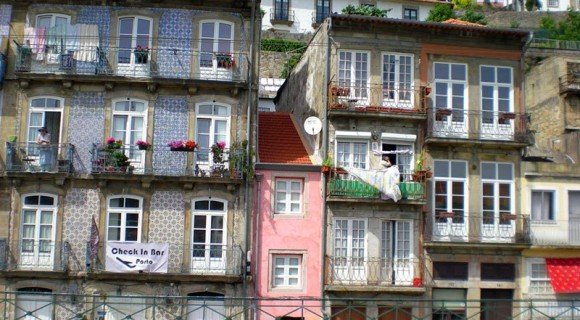 Miragaia is one of the nicest neighborhoods in Porto. Its origins are medieval, it is in an area that was outside the city walls, so called “arrabaldes” (the suburbs), where the Jews and the Armenians from Porto used to live.

The colorful houses of Miragaia are constructed below the level of river Douro, on an ancient beach that served as a medieval shipyard, where the boats were built during the Discoveries Era. Nowadays, the houses are protected by a large wall and the upper floors are built over arches, which gives the whole neighborhood a very special atmosphere.

In the famous celebration of the “São João do Porto” festival, Miragaia usually is the last place in town to go to bed. The party goes on and on all night long, and, most of the time, still moves in the morning.

The heart of Miragaia is the Church of São Pedro, where, for centuries, were saved the relics of St. Pantaleon of Nicomedia, brought from Armenia to Portugal, after the fall of Constantinople, in 1453, in the hands of the Turks.

The English Club, the Alfândega Nova, the Palácio das Sereias, and even a large section of medieval wall can be seen in Miragaia. It was also in Miragaia where Portuguese-Brazilian poet, Tomás António Gonzaga, was born, in 1744. Gonzaga is regarded in Brazil as a national hero for having participated in the first attempt of the country’s independence, in 1789.

At the evening, Miragaia lives of its restaurants and bars, where you can quietly have dinner or enjoy a drink with some friends, sharing, at the same time, the superior views of the river and of the rest of the city.

The upper part of Miragaia until Virtudes is another area that deserves a closer look, even at night. The views over river Douro and the entire western hill of the city and Foz, are a nice bonus in the end of your walk.