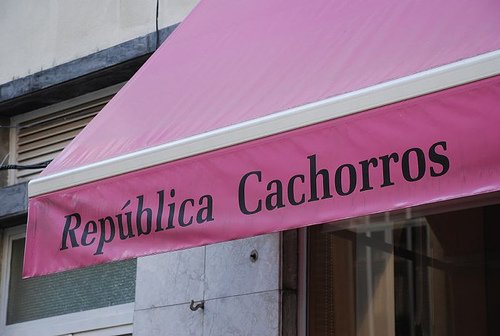 República dos Cachorros is one of the best well known places in Porto to grab a hotdog. It’s located in Praça dos Poveiros and if you’re into a tasty hotdog, try to grab a chair first! Around lunch and dinner time, they’re crowded so if you don’t like to wait in line you have two options: come in a little earlier or choose somewhere else!

You’re probably thinking: why such a fuss about a hotdog. It’s just bread, spicy sausage and cheese. Well, you’re probably right but the spicy sausage makes it hot, the melted cheese gives it a sticky look and the fact that they cut the hotdog in small pieces so you can enjoy the flavors makes all the difference. That and the crispy portion of fries on the side and a cold beer. All that set in front of you and you’re ready to go. Well, don’t go too far ’cause you’re gonna want to have another hotdog and another beer.

The hotdogs are very similar to those of Gazela Snack-bar. Actually, República dos Cachorros belongs to a couple of former employees of Gazela. Try both. And then, you decide. Because I can’t! I think a lot of people in Porto can’t. Plus, both places are very similar: small, lively and they have tasty hotdogs. If you want to grab a bite sitting down, República dos Cachorros has a couple of tables outside so, it might be a good choice – even if you have to wait a little bit for a seat.

At República dos Cachorros you’ll be in a walking distance from other places that serve great snacks and food in downtown Porto. Casa Guedes, Duas de Letra. If you’re into an ice cream, Geladaria Neveiros is in a two minutes walk from there. You can also walk to Santa Catarina Street, São João National Theatre and, a bit further ahead, São Bento’s train station.

There’s only one thing I don’t like about República dos Cachorros: they close at 10:30pm. Way too early!