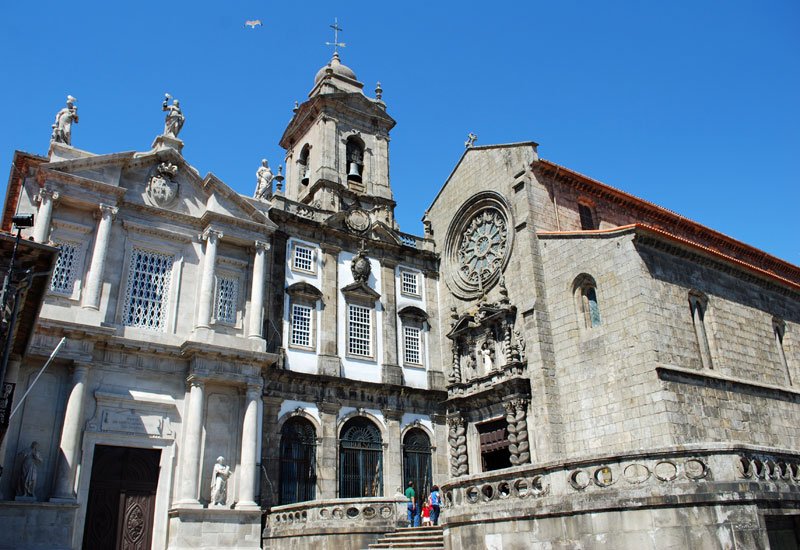 The Church of São Francisco do Porto is a fine example of Gothic architecture in the city. This little gem started being built in the 13th century, but suffered several delays and accidents on the way. Only in 1383 the works definitely progressed. It was completed in 1410, under the patronage of King John I.

You can easily find the church near Praça do Infante, or just a few yards above Ribeira. From the street, is easy to see the stately big south wall of the building, with its Gothic arches, windows and rosettes, as the granite staircase that leads up to the main door. Next to the church, there is a picturesque tram station, with connections to other parts of the city.

Outside the main door of the church you will see a large statue of St. Francis. Inside, however, the decor is less sober: the gilded baroque columns and altars show contrast with the sobriety of the exterior. The church is composed of three large naves, all gold-plated. We estimate that more than 650 pounds of gold where used to cover the whole church.

In the 16th century, several noble families contributed to the Order of St. Francis, the “manuelinas” chapels around the major nave are from that period.

In the 18th century the interior of the church has become more, and more rich. The sumptuous Baroque style, provided by the arrival of gold from Brazil, became the main decoration of the church.

The most famous altarpiece of the Church of São Francisco is the “Tree of Jesse”, from 1718. The piece represented all generations of Jesse and king David to Jesus Christ.

It is also through the Church of São Francisco you can have access to the catacombs of the city, a series of underground galleries where some Franciscan friars and some noble personalities of the city are buried.