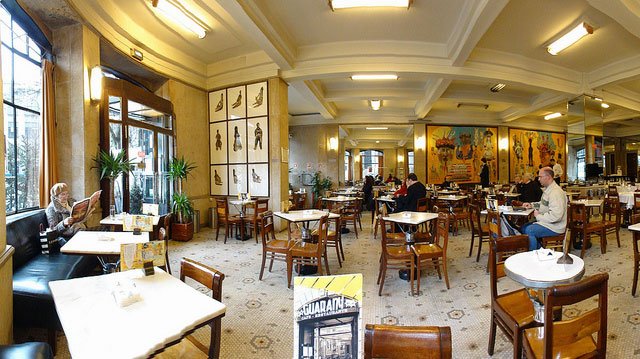 Café Guarany is located in Avenida dos Aliados, Porto’s main avenue. There’s no way you’ll miss it! And you shouldn’t. Honestly, I can’t say that there’s something on the menu that you really must have. The thing about this cafe is its history. A bit like Majestic Café, Guarany is one of the eldest cafes in town.

It first opened its doors in January 1933. Guarany reminds us of the indians from South America and this was used as an allusion to Brazil, XX century world’s largest coffee producer. The people who went to Guarany in the 30’s where mainly musicians, writers, intellectuals and businessmen. After a renovation, Guarany reopened its doors to the city and is again a reference for those who have a creative and inquisitive mind.

Café Guarany’s decoration is mostly the same. When the cafe was renovated a triptych by Graça Morais was installed in the cafe’s main interior wall. As it happens in Majestic, you’ll feel the history of the cafe and the aura of the old times. But you will also meet the young thinkers and writers.

Oh! I totally forgot! There is something on the menu that you have to try: hot chocolate! How could I forget about this!?! A hot chocolate on the terrace, just outside, overlooking Porto’s main avenue, the city hall and all the majestic buildings around. That’s a good plan for a cold afternoon. Or, in the summer, just ask for a cold drink and stay outside. If you stay inside, bring your note book – the one with blank pages and a pencil/pen – and write. Your memoirs, the souvenirs list. It doesn’t matter. It feels right to do it there.