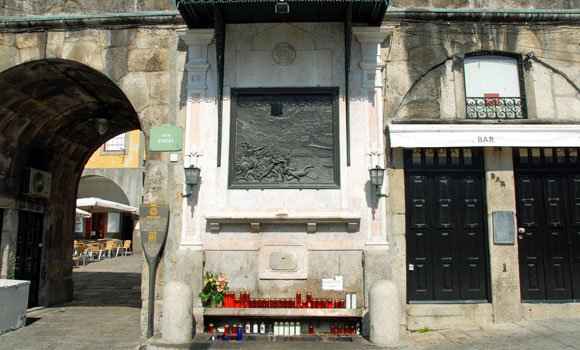 When walking around Ribeira, packed with picturesque colorful houses and lively restaurants and bars with views to the Douro river, few people (locals or tourists) notice this bronze relief sculpture, Alminhas da Ponte, side by side with number 20 door.

Indeed, it is worth taking your eyes off the amazing view from Cais da Ribeira to the river. A few meters from D. Luís I bridge, on a wall near one of the arches of Ribeira, you will find this simple but high on historic symbolism sculpture. It is a work by António Teixeira Lopes and pays tribute to the tragedy of the “Bridge of Boats” (Ponte das Barcas), occurred in this place back on March 29th 1809.

That bridge consisted of 20 boats linked by steel cables, a project by Carlos Amarante inaugurated on the August 15th 1806. History has it that during the Peninsular War, at the time of the second French invasion, under the command of the Marshall Soult, as the troops invaded the city, the people of Porto desperately started running onto the bridge.

You can imagine the weakness of a bridge made of boats…well, the boats split and many people died in the Douro river waters – some advance numbers as high as 4000 people, but the real number was never known. Nowadays, people of Ribeira still remember this tragedy with sadness, almost as if they have lived during that time.

It is located on one of the most typical touristic spots in Porto – Ribeira – but still it is out off the beaten path and surprisingly not mentioned in most guide books. Try to find it if you are nearby!

If you’re in Ribeira, take the time to visit Casa do Infante and Palácio da Bolsa and have a drink at Wine Quay Bar. Or just cross the brigde and visit Graham’s Port Lodge.